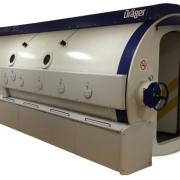 Exposure of humans in hyperbaric treatment devices (hyperbaric chambers) up to 2.0 bar overpressure (equal to 20 meters depth of water) with the breathing of oxygen is known as hyperbaric oxygen therapy, HBO therapy or HBOT.

Due to tragic accidents with human fatalities in the past, different countries established safety regulations regarding technical and personnel standards for the performance of HBOT during the last decades. Within the European Union hyperbaric chambers are regarded as ‘class IIb medical device’ according to the Medical Devices Regulation (MDR) and have to meet strict safety standards to prevent harm to patients, caregivers, and third parties.
END_OF_DOCUMENT_TOKEN_TO_BE_REPLACED

The American Medical Association has adopted a resolution opposing the unsafe use of so-called “mild hyperbaric oxygen therapy” in “mild hyperbaric facilities.” The policy D-270.986, adopted 26 July 2022, was initiated by the Undersea and Hyperbaric Medical Society and represented by UHMS Past President Dr. Laurie Gesell, an active practitioner of hyperbaric medicine and a member of the House of Delegates (HOD), the legislative and policy-making body of the American Medical Association.
END_OF_DOCUMENT_TOKEN_TO_BE_REPLACED

The British Hyperbaric Association (BHA) is a charitable organisation promoting and supporting the safe and appropriate use of hyperbaric medicine in the British Isles.

The BHA supports the view of the American Medical Association (AMA) and the US Food and Drug Administration (FDA) in opposing the unsafe provision of so-called “mild” hyperbaric oxygen therapy (HBOT) in “mild” facilities. A link to these important statements can be found in our Further info section : “Ethical Hyperbaric Oxygen Therapy”